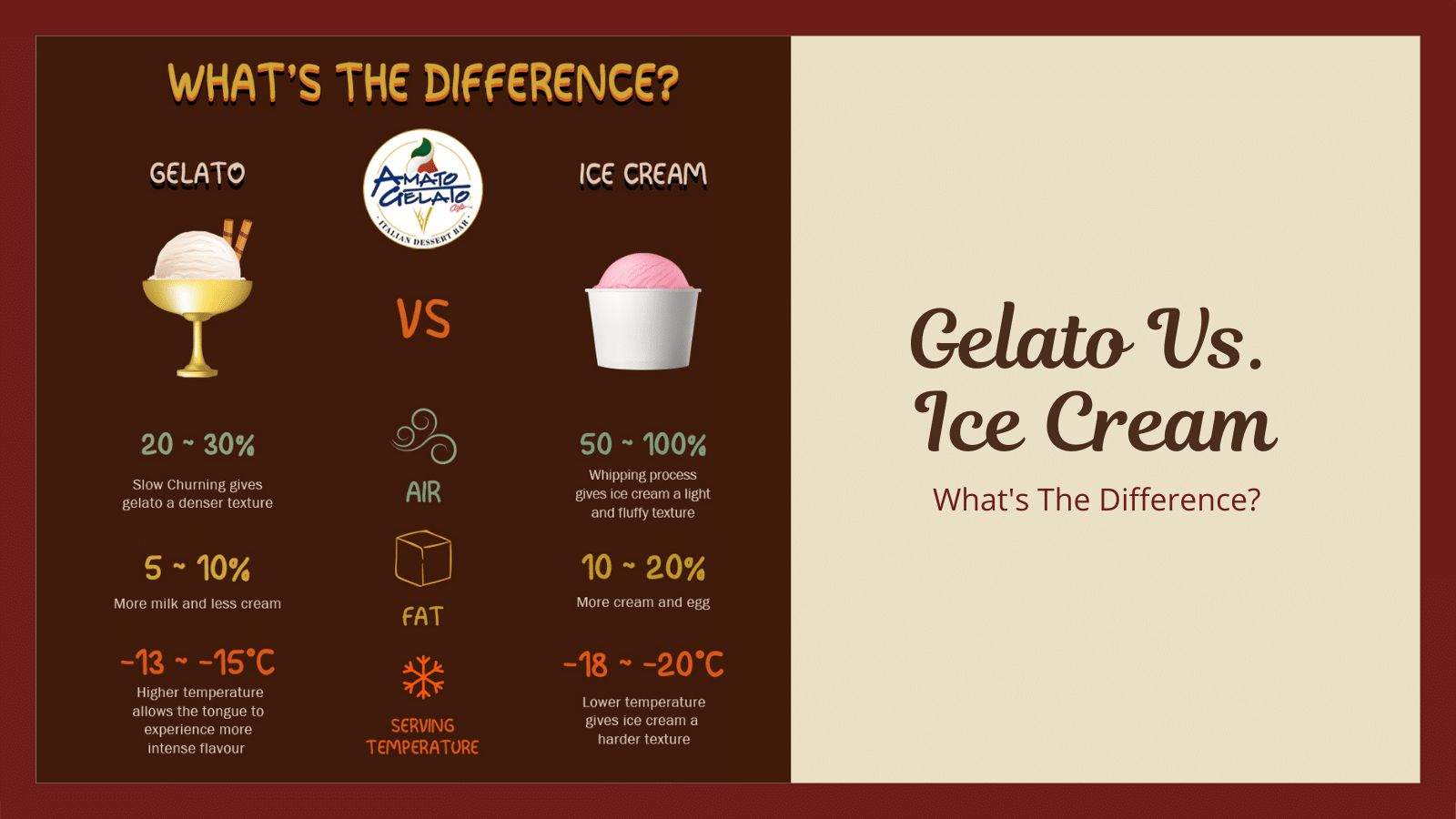 From time to time, we need to relax. A great espresso or a cappuccino at a modern, warm and inviting cafe would do, right? What if you are searching for something cold and sweet? Then you will want a gelato or an ice cream. Why? We will discuss that right away. Meanwhile, be aware that you can enjoy the best from an Italian Cafe in Calgary at Amato Gelato, located in the central neighbourhood of Kensington.

Back to gelato… which many tend to equate with ice cream. This is not the case, as there are some key differences

Is There A Difference Between Gelato & Ice Cream?

Yes, there are differences… surprised? That’s normal because, at first look, they are pretty similar. Both are frozen desserts made from the same ingredients, dairy and sugar. Is it the origin of these desserts that create a difference? One is from Italy and the other one… we don’t know for sure, but there are some ideas on its origins. Anyways, that’s the obvious difference; but there are many others. Let’s get right to explaining what these differences are.

Simply put, gelato has less air than ice cream. Yes, that’s right. Both of them get some air when they’re churned. Now, if gelato and ice cream have similar ingredients and both are churned, how come one gets less air than the other? The secret is the speed at which dairy and sugar are churned to make gelato or ice cream. While gelato needs slow churning, ice cream’s whipping process is faster, which incorporates more air. Consequently, gelato gets silkier and a denser texture while ice cream gets lighter and a fluffy one.

So, why does that matter… Gelato gets less air and? Well, with less air, it’s denser, meaning more stuff can fit a smaller place. Since gelato is thicker, has less air, that means you get more gelato than ice cream in equally sized scoops. Thus, gelato is more fun with less air!

Gelato has less fat than ice cream, mainly because gelato uses more milk than cream. In fact, you can even say goodbye to the cream and use whole milk for a healthier option. There’s another reason: you can use fewer egg yolks or not use any at all depending on the recipe.

Gelato is still a fatty dessert, but you can still enjoy a sweet and pleasant moment without adding as many calories or fats to your diet.

Gelato should be semi-hard, homogenous and silky smooth. Of course, there are many techniques involved here, but, as for consistency, there is a common one: storing gelato around -13° C. What about ice cream? Consistency is essential there, too, so they are kept around -20° C.

Why does this make a relevant difference? The key here is the way the tongue works. We have about 10,000 taste buds to help us experience flavour. What happens when they get numbed? You get a lighter flavour or no flavour at all. So, it’s easier getting your tongue numbed while eating ice cream than gelato. That’s why the flavours are more robust; in other words, you can taste flavours better while eating gelato than ice cream.

So, which to choose? We shared some pros gelato over ice cream on the assumption that you are looking for something silky, sweet, less fat, and easy to enjoy! However, there are ice cream lovers too.  While the Amato Gelato team may be biased, our preference leans towards Gelato over Ice Cream! We’re curious to know if you agree?

Suppose you don’t know what a gelato tastes like. In that case, you can visit us and try our Pistachio or Matcha Tea Gelato (popular flavours) or any of our other 72 rotating choices for new experiences. We invite you to join us at our Italian Cafe in Calgary for espresso, hot food, baked goods or even have a Roman-style pizza paired with a Gelato as dessert!