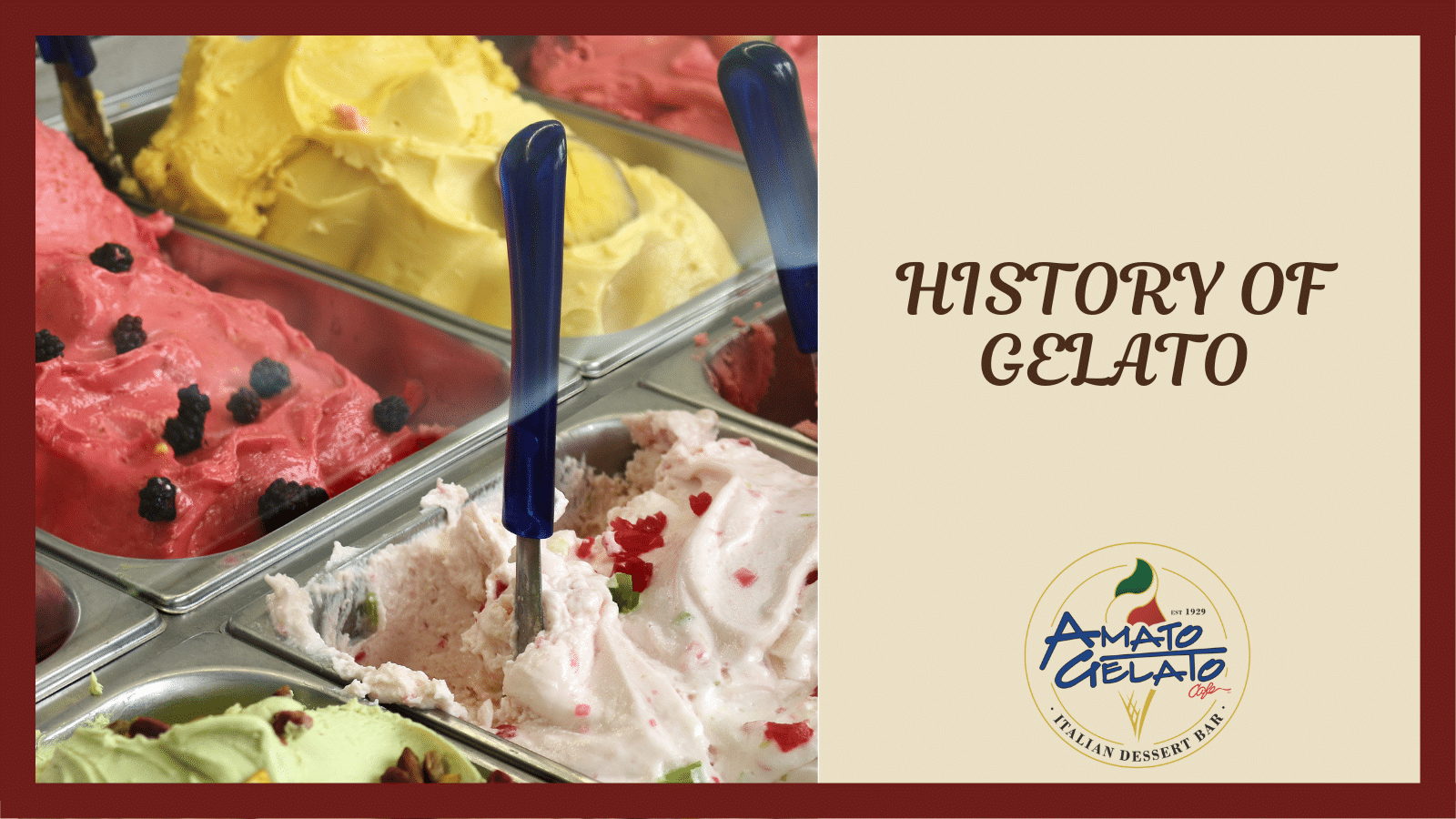 Gelato is our favourite dessert! Its creamy, thick consistency, along with its rich and delicious flavour, make it the perfect frozen treat. So, where did it all start? Let’s dive into the history of Gelato!

The Background of Gelato

Gelato has a rich history that dates back to thousands of years ago when the first frozen treats were created.

The Origin of Gelato

The beginning of Gelato can be loosely traced back to 3000 B.C, in which Asian cultures consumed crushed ice with flavourings. Five hundred years later, it became part of the Egyptian pharaohs’ customs to offer guests a cup of sweetened ice with fruit juice. The Italians then joined in when the Romans started eating the honey-covered ice of the Etna and Vesuvius volcanos.

During the Italian Renaissance, the renowned Medici family of Florence sponsored a contest that aimed to find the best-frozen dessert. As a response, Ruggeri, a cook and chicken farmer, joined, and his recipe was a frozen dessert made with ice and sweet fruit, which is very similar to the modern-day sorbet.

Ruggeri won the Medici family contest. With this, he caught the attention of Caterina de Medici, who took him with her to France. Caterina believed that his dessert could rival the desserts of famous French chefs, so she wanted him to make it for her wedding with the future king of France.

The Inventor of the Gelato

Later on, during the late 1500s, the Medici family commissioned artist and architect Bernado Bountalenti to create a feast for the visiting King of Spain. He used his culinary skills to make an elaborate and aesthetically pleasing display and presented it to the king. The exhibition included a frozen creamy dessert called “Gelato.” Because of this, Bountalenti is credited as the inventor of the Gelato.

However, a famous restaurateur named Francesco Procopio Dei Coltelli was the one who made the Gelato famous in many Italian cafes. Then, in 1770, Giovanni Basiolo introduced Gelato to New York. Today, there are plenty of shops in the U.S. offering high-quality Gelato.

Often, Gelato and ice cream are used interchangeably. But, they are not the same! The main difference between these two is that Gelato has significantly lower fat content because it has lesser cream and more milk. On top of that, the Gelato is churned in a slower phase, giving it less air and a more intense flavour than ordinary ice cream.

Gelato has significantly changed over the years since Bountalenti first served it to the king of Spain. The main difference between old and modern Gelato is how they are made.

Making Gelato back in the day was quite difficult because no storage system enabled it to last for an extended period. But, in 1846 CE, hand-crank freezers were perfected in the U.S., changing how deserts were made.

However, the basics are still very similar for the old and modern Gelato in terms of the ingredients used. It’s just that modern Gelato has a broader selection of flavours.

It is undeniable that the Gelato has a long and exciting history. As you see it today, it has significantly evolved from its humble beginnings of shaved ice topped with sweet fruits or honey. Today, Gelatos are rich, creamy, and flavorful desserts loved by many worldwide.

Are you looking for Gelato in Calgary? If your answer is yes, then you are in for good news. You have a wide selection of high-quality gelato shops at affordable prices.